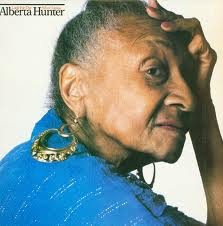 I lost several weeks of work on Leaving the Blues because of some minor health issues.  I finally decided to clean out my basement and in the hauling and bending I forgot I was not a teenager any more!  The habits of a life time have to be re-evaluated.  Once with a friend I carried a trunk full of my﻿ all of my belongings for ten Manhattan blocks...back in the '70s.  When I finished this current house cleaning I could barely walk up my basement steps.  After some tentative walking and no bending I had X-rays and don't have any serious damage but a course of physical torture...I mean physical therapy...is on order.
As I was trying to heal from this mishap I couldn't write but I thought a lot about Alberta Hunter.  When she returned to the stage to begin the second phase of her career she was already in her 80s! At the Cookery, where I saw her perform several time, she was effervescent, sharp and energetic.  As I remember her she seemed to burst from the stage in her huge hoop earrings and elegant gowns.   When she sang "Handy Man" and declared he "shakes my ashes, greases my griddle, churns my butter and he strokes my fiddle..." her double entendre made old and young scream with joy.  See for yourself:  https://www.youtube.com/watch?v=ZLoPKQZRjOQ
Still she was an old woman, someone who never thought she was beautiful.  She'd made up for the poverty of her upbringing by working hard and giving herself the luxuries she never had as a child.  Still she lived in a Jim Crow country where the memory of the Underground Railroad and lynching were not distant.  So it was more than simply overcoming economic deprivation. The Cookery, where her career found it's renaissance, was opened by Barney Josephson, the first white entrepreneur to operate an integrated New York club in the early days; not an accident I think.  He saw artists before he saw color or age.
When Alberta stepped on to the tiny Cookery stage she stepped carefully, as an old woman does.  Looking back I now remember she didn't move around that much once she was in the spotlight...except for her flashing eyes and beautifully manicured hands.
Later as her health became more frail the Cookery rigged a small dressing space on the same floor as the restaurant so she wouldn't have to climb the stairs from the lower level.  Still Alberta performed with all the life energy she had.  I recently attended the gathering of OLOC--Old Lesbians Organizing for Change and thought Alberta would have been a headliner there!  The room was full of sparkling, white-haired lesbians, Baby Boomers and older, who were still determined (despite bad eyesight and creaky bones) to make the world more habitable for us.
In writing this play I want to see who this fiery old woman might have been.  What propelled her onto that stage when her joints must have been aching?  To be old and Black and female and lesbian in the US is to be the least valuable asset in the eyes of some.  With this exploration of the inner resolve that kept Alberta Hunter climbing onto the stage I think we'll see one of the most valuable gems this culture could ever have.
Join us at the New Conservatory Theatre Center in spring of 2016!  http://www.nctcsf.org/
﻿

Posted by Jewelle Gomez at 2:40 PM No comments:

Jewelle Gomez
Author of seven books including the double Lambda Literary Award-winning vampire novel, THE GILDA STORIES. She is currently playwright in residence at New Conservatory Theatre Center. Waiting for Giovanni is the first in a trilogy about African American Artists in the first half of the 20th century. "Waiting for Giovanni" is currently being produced by TOSOS and directed by Mark Finley at The Flea Theater in NYC. (July/Aug 2018) The second play in the trilogy is "Leaving the Blues." The third play is "Unpacking in Ptown" and will premiere at NCTC in 2021.