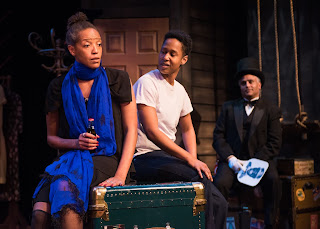 After a successful run at New Conservatory Theatre in 2017 Leaving the Blues is almost ready for a new incarnation.  It'll be done as part of the staged reading series at TOSOS (The Other Side of Silence) www.tososny.com  in New York City on Sunday afternoon, July 28, 2019.

Mark Finley, who did an amazing job with the production of Waiting for Giovanni last summer will be directing.  His take on that show was more minimalist and fit the space at The Flea Theatrer in TriBeCa perfectly.  I can't wait to see what his vision is for the tribute to lesbian singer/songwriter, Alberta Hunter.  It features a couple of traditional songs as well as a song written especially for the play by composer, librettist, singer Toshi Reagon www.toshireagon.com.  Toshi is an old friend from the vampire dance/musical, (which I adapted from The Gilda Stories) Bones and Ash, that toured a while back.

On the topic of not eating: food seemed to be a theme for the sold out run of the Baldwin show.  Starting with me and the president of the TOSOS board Michael Zegarski, discovering that we are both chicken wing aficionados!  We found that out after the long audition day in which we got to meet Robert DiNiro (He was the greatest, but that's another story.) 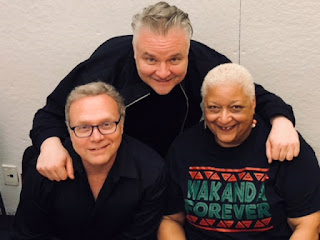 Mark Finley, Michael Zegarski and me in auditions

We'll be teaming up again for the reading of Leaving the Blues in New York City July 28th and fingers crossed maybe a TOSOS production in the future.  Watch this space.

Posted by Jewelle Gomez at 2:45 PM No comments:

Jewelle Gomez
Author of seven books including the double Lambda Literary Award-winning vampire novel, THE GILDA STORIES. She is currently playwright in residence at New Conservatory Theatre Center. Waiting for Giovanni is the first in a trilogy about African American Artists in the first half of the 20th century. "Waiting for Giovanni" is currently being produced by TOSOS and directed by Mark Finley at The Flea Theater in NYC. (July/Aug 2018) The second play in the trilogy is "Leaving the Blues." The third play is "Unpacking in Ptown" and will premiere at NCTC in 2021.